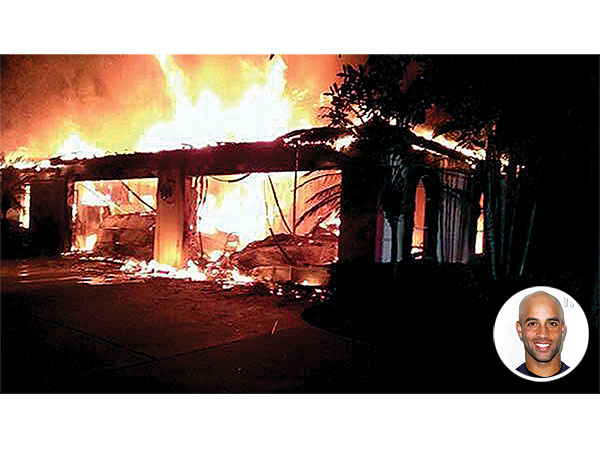 BY STEVE HELLING The Avila Golf and Country Club in Tampa is known for its quiet, idyllic living. So when an explosion rocked the quiet neighborhood before dawn on Wednesday, several people frantically called 911. “Roughly after 5:30 a.m., I woke to a large boom,” a neighbor tells PEOPLE. “I thought it was thunder. I immediately got out of bed; I wasn’t really sure what was going on. I walked out and saw a big blaze. It was engulfed in flames pretty quickly. It was terrifying. There were some off and on explosions during the course of the morning. When firefighters arrived, they found a raging fire at a mansion owned by former tennis player James Blake. As crews entered the 5,856-square foot mansion, they made an even more gruesome discovery: a family of four had been shot in their bedrooms, doused in fire accelerant and surrounded by commercial-grade fireworks. “The fire was intentionally set,” Hillsborough County Sheriff’s Colonel Donna Lusczynski said at a news conference. “Fireworks were found throughout the house.” A police investigator tells PEOPLE that the scene was “chaotic and terrible. It’s one of the worst things I’ve ever seen.” According to TV reporter Meredyth Censullo, all four victims were found with “gunshot wounds to the head” and “had heavy duty fireworks wrapped around their heads.” Retired tennis player Blake, 34, bought the home for $1.5 million in 2005, but moved out more than a year ago. He rented the home to a Tampa executive and his family. Multiple news sources have identified the victims as Darrin Campbell, his wife, Kim, and their children, Colin, 19, and Megan, 16. “It’s always awful to find such young people killed,” says the police investigator. “We are trying to determine why this happened and who is responsible.” As news of the deaths spread throughout the Tampa community, those close to the Campbells expressed their sorrow. “Obviously, our hearts are broken,” said Ryan Kelly, the principal at Carrollwood Day School where the teens attended. “We are grieving as a community, and we have rallied around our students, and our faculty, and our parents.” Fire officials say that it could be several days before investigators are able to sift through the remains of the home. Twelve hours after the explosions, the fire continued to smolder while police looked on helplessly. “It is destroying potential evidence to tell us what may have happened, what may have led to this fire,” says Col. Lusczynski. “We have to wait for answers.” • Reporting by KEN LEE and ELAINE ARADILLAS

This rapidly evolving coronavirus (COVID-19) has imposed an unsettling, fluid situation upon our community and its businesses. While the team here at A to Z Fire still aims to maintain a “business as usual” approach, we are making a number of significant changes to our operations to account for a situation that is far from normal. A to Z Fire is now operating normal business hours. Monday - Friday 8am to 5pm